On October 2nd, 2018, the NASCAR officials make the new rules package public with an announcement that applies changes to both the engine and aerodynamic configurations, once again making the driver skills the primary focus. 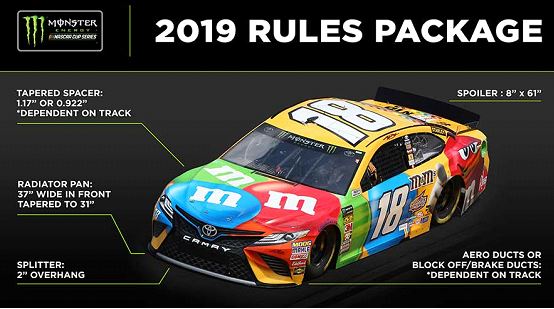 NASCAR Executive Vice President Steve O’Donnell said they have been working hard over the last 2 years to make the new package a reality. Not only have they worked with the teams, but also the stakeholders, drivers, engine builders and the OEMs. He also added that they want the new package to focus more on the driver skills as that’s what the close racing is all about and they want more of the side-by-side racing action the sport’s known for.

The announcement stated that there will be unique packages that have been carefully put together for the best benefits at different tracks in the Monster Energy Series. The first new rule applies to the engine, which is reduced from 750 to 550 horsepower by decreasing the size of the smaller tapered spacer. With the smaller spacer, less air would flow through, which decreases the amount of power the car makes.

For most, this might seem like a drawback, but it once again depends on the drivers and how they perform. With longer tracks, the entrance and exit speeds through corners are sure to be more important than ever as the cars would have the additional 200 horsepower to help correct small mistakes through the turns.
The aero ducts are changed as well, allowing the race drivers to get closer to each other during the races. The new rules apply to 17 of the races next year but doesn’t include the Daytona 500 as this race would still run of the standard rules.

Actual Changes to the Cars

With the new rules in place, we’ll see only a few small changes to the cars, but the drivers would need to work a lot harder to hold onto their leads. One of the best changes is to the aerodynamics of the cars, which will introduce more down-force, which has been an issue over the last few years.

The new rules increase the rear spoiler to 61 inches wide and 8 inches high while also including a 2-inch overhang to the front spoiler. The cars will also feature a 37-inch radiator pan, which meets the 31 inches at the back of the car.

O’Donnell said that the new packages focuses more on the big picture of where the sport is headed. The team is very happy with the current setup, but they need to consider how the sport would evolve. He also added that he knows they have some of the best engineers in the industry, but with the current lower downforce package, it means higher entrance speeds, which makes it harder to produce tires that provider the great wear that drivers are constantly after.