It’s been an extremely long and tough season for Ty Dillion, the NASCAR Cup Series driver, but he once again found solace in the recent restrictor-plate racing event.

Dillon, the grandson of Richard Childress, the famous NASCAR owner, and the driver of the No. 13 Chevrolet for the Germain Racing team hasn’t enjoyed loads of success in 2018, making this his second full-time year with the NASCAR organisation.

Three out of his four best finishes this year have come from either Talladega or Daytona which also includes a 15th place finish in the most recent race on Sunday. The 26-year old, finished 15th in the Talladega race in spring, 13th in Texas during spring, and 6th which was a season best at Daytona in July. Dillon has been missing out on the Top 10 for the year and currently ranks 28th in the NASCAR CUP Series standings.

“Talladega continues to be a solid track for me as I’m very comfortable with the style of racing that’s involved. This is exactly what the team needed after a few difficult weeks,” Dillon stated after the most recent race.

“We performed well up front, claimed a bonus point once Stage 1 was completed, and showed everyone that Germain Racing can built lightning fast superspeedway vehicles. I hoped we could have achieved a Top 10 finish, but that’s how the cookie crumbles sometimes at some of these tracks.” 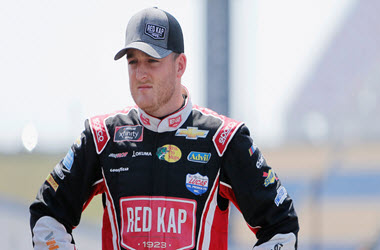 Dillion entered the season with loads of optimism, especially due to the fact that multiple organisational changes occurred, including Matt Borland as new crew chief along with several new engineering staff. However, Dillion recently admitted that the lack of good results has been rather frustrating.

“Although its easy, doubt can still easily creep into your mind and keep you down. This sport only has one winner each week, and it makes it difficult to stay positive when you are not getting anywhere.

“I believe the biggest thing is to keep faith and keep my priorities straight which is something I learned in the last few weeks. This season and year has undoubtedly been the most difficult in my life. I feel fantastic about where we are heading at Germain Racing as well as how the team and crew continue to grow in these difficult times. When we eventually fire on all cylinders, we are definitely going to be a power team.”

Richard Childress Racing had an opening in a CUP Series team which was filled by Daniel Hemric from Xfinity Series. When asked if the RCR team was an option, Dillion stated that RCR has been his entire life. However, he has a great racing career at Germain Racing, and he wants to put everything he can into that team.
Dillion doesn’t know what the future will bring, but he plans to remain at Germain Racing for the next two years before he decides to look for another team.