Lewis Hamilton has recently claimed his fifth Formula 1 World Championship title, making him the second most successfully F1 driver of all time. The 33-year-old driver became the third athlete in history to win a total of 5 world titles. He now matches Juan Manuel Fangio, the Argentine legend, and is only two titles behind the extraordinary Michael Schumacher. 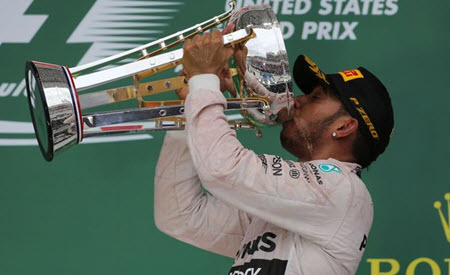 Lewis Hamilton only needed to finish in seventh position at the Mexican Grand Prix on Sunday to claim the championship, even if Sebastien Vettel from Ferrari managed to win. However, Vettel only managed to place second in the race behind the sensational Max Verstappen even though he had a strong race.

Hamilton had a difficult race in Mexico, battling with tyre problems throughout the race, but he still managed to finish in fourth, one position from the podium, which was more than enough to claim the biggest achievement of his career. Once the race was completed, Hamilton performed a series of doughnut spins before waving to over 135,000 fans in the crowd.

Lewis Hamilton and Sebastien Vettel Comments After The Race

“It’s a strange feeling at the moment. This victory was made possible through tons of hard work and plenty of stressful races. I am extremely grateful for everyone that assisted me to claim my fifth F1 title. To achieve this, when Juan Manuel Fangio has also achieved it with Mercedes, is an extraordinary moment.”

“It was an awful race. I started off in a fantastic position and managed to work my way up the field but after that, I’m not 100% sure what went wrong. I merely tried to hold on and get the car over the finish line.”

Vettel decided to break free from his post-race interview and went over to Hamilton to congratulate him as the two drivers embraced the end of a titanic battle. Vettel stated: “Well deserved and congratulations to Hamilton and his Mercedes team. They managed to do a fantastic job all year round and we certainly have no choice but to accept it. We obviously would have loved to hang in a bit longer, but unfortunately it was not the case.”

Mercedes Seals the Deal in Mexico

The Mexican Grand Prix was a clear reminder of what could have been for Sebastien Vettel, as both Valtteri Bottas and Lewis Hamilton suffered with excessive tyre wear which caused them to fall back in the field, giving him the perfect opportunity to attack aggressively on the Red Bulls in the last few laps.

However, it was far too late for Sebastien Vettel as his season unravelled during the summer with multiple errors from both the team and driver. Mercedes and Hamilton were far below their high standards which they set for themselves in the beginning of the season. However, they managed to win 6 out of 7 races, starting with the German Grand Prix and ending with the Japanese Grand Prix in early October. This was enough to seal the deal for Hamilton and Mercedes.