Just a few days after the memorable race in Belgium, the F1 drivers will make their way to the incredible Autodromo Nazionale Monza. The locals call it La Pista Magica, and it is not surprising to see why. Constructed in 1922, the Monza circuit has played host to some of the most iconic moments in Formula 1 history. The mesmeric near-win of Jim Clark in 1967, the closest F1 finish in 1971, and Gerhard Berger’s phenomenal win for Ferrari after the death of Enzo Ferrari in 1988. 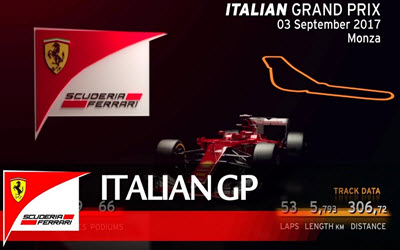 So, what can we expect from the Italian Grand Prix which will be the 68th edition to take place at Monza this year? How will the racers perform at the Autodromo situated in the gorgeous park of Milan?

Ferrari claiming a victory at Monza is certainly the dream of every Italian fan watching the Grand Prix this year and it could be a reality this weekend thanks to the Ferrari SF71H which represents the strongest package since the 2014 rule change which arguably makes them the best on the grid in 2018. Add Sebastien Vettel to that who has a certain way when it comes to Monza as well. So everything looks nicely composed for more Vettel and Hamilton histrionics.

Is anyone else in the running? Well, both Kimi Raikkonen from Ferrari and Valtteri Bottas from Mercedes are overdue for a win. However, you can expect that they’ll both be stood down when their teammates are lined up for a win as the battle for the championship heats up. As for Daniel Ricciardo and Max Verstappen at Red Bull, they’ll certainly be the outsiders of the top 3 teams this weekend at Monza. It’s essentially a track that rewards a slippery body and a powerful engine, and these are not the strong points for the Red Bull RB14’s.

• Lewis Hamilton’s next pole position will be the 200th win in World Championship history.
• Sebastien Vettel has never won at Monza with Ferrari.
• Valtteri Bottas never finished or qualified outside the top 6 at Monza during the turbo hybrid era.
• Daniel Ricciardo from Red Bull is currently experiencing the longest run without a podium finish (7 races to be exact).
• Max Verstappen has never finished or started in the top 6 positions at Monza. This means Max’s father still holds a better record at Monza than he does.
• Romain Grosjean has only managed to score points in Monza once in a total of 6 starts on the track.
• Sergio Perez completed a career-best of 2nd place at the Italian GP in 2012.
• Lance Stroll became the youngest racer to start a GP last year from the front row at the age of 18.
• Obtain pole position at the Mona GP is statistically more crucial than the Monaco GP.
• Ferrari has claimed a total of 18 wins at Monza, which is the record for most wins by any constructor at any circuit.